The historical environments and their industrial-era heritage mingle with innovative architecture and the authentic dockworkers, sailors and fisherfolk who use the harbour alongside students, architecture tourists and young families.

Today, Elsinore Harbour is home to museums, festivals, concerts and city life, all of which take their cue from the maritime environment. In the centre is the Cultural Harbour, where the old shipyards now host Kulturværftet (the Culture Yard), which via international cooperation focuses on creativity and digital technologies. Also found here is the Shipyard Museum, which illustrates the era when the shipyard whistle still sounded. Near the quay are docked historical ships, maintained by volunteers who once worked in the old shipyards. The former dry dock has been transformed into the internationally renowned M/S Maritime Museum of Denmark designed by Danish architect Bjarke Ingels.

Elsinore Harbour is a cultural harbour as well as an active ferry and port, and it bears witness to Denmark’s continued links with the sea. Here, like in so many other harbours in Denmark, the dock is an example of how the modern culture of the past is respected by incorporating existing elements and building on them, as has been done in the transformation of an old dry dock into a contemporary maritime museum. Here, the raw aesthetics of modern culture and Denmark’s entire naval history is exemplified and made relevant to today’s visitors.

A walk through Elsinore’s old town illustrates how Dutch merchants and their families put their stamp on the city with beautiful half-timbered houses from the 1500s. The ancient Carmelite Priory and St Mary’s Church, where famed composer Dietrich Buxtehude was the organist, and not least Kronborg Castle, demonstrate Elsinore’s glory days and its proud maritime heritage.

Today, culture and festivals have taken their rightful place in the harbour and narrow streets of Elsinore. In August, the Sundtold Market transforms the entire area into one huge maritime market where stalls and stage events tell the story of the lucrative “Sound Dues”, a shipping toll that ended in the 1800s. At the Knejpe Festival at the beginning of October, Elsinore’s many harbour bars provide the setting for a music festival in which musicians from around the world entertain in historical surroundings.

Open all year round, the nineteenth-century Shiphandler’s House and its internationally famous tattooist, Royal Tattoo, attracts customers from around the world with its distinctive maritime tattoos, and at the Shipyard Museum visitors can learn the story of the Elsinore Shipyards, where some of Denmark’s most beautiful ships were built from the mid-nineteenth century until 1983. For 100 years, the shipyards served as the city’s largest workplace, and its daily rhythms made up the very pulse of the city. Today, another kind of pulse can be sensed – one that is still strongly rooted in maritime heritage

The M/S Maritime Museum in Elsinore is one of the most talked-about museums of recent years. The modern exhibitions and iconic underground structure designed by the world-famous BIG (Bjarke Ingels Group) have garnered international praise since the museum’s opening in 2013. The New York Times heralded the museum as “a cutting-edge cultural venue”, and the BBC declared it to be “one of the eight greatest new museums”.

The underground structure is built into a former dry dock, which until 1983 was used for shipbuilding by the now-defunct Elsinore Shipyards, and it is a prime example of retaining the raw aesthetic of the industrial era by building onto existing elements.

Inside, you will find interactive installations, films and games that take you deep into the world of shipping, whether you are an adult, a child, a ship’s captain or a layperson. As a visitor you will see, hear, and actively experience the maritime universe. You will learn about how shipping connected the entire world, from the flourishing merchant period of the 1700s to our contemporary global society in which over 90% of all products are shipped by maritime transport before ending up in our shopping baskets. 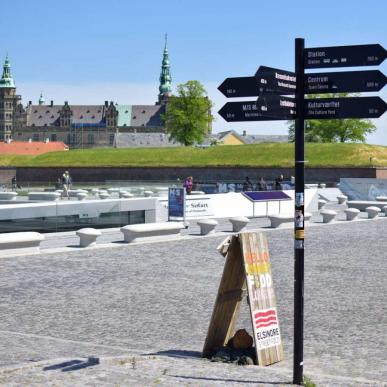