If you drive along Strandvejen from Helsingør towards Copenhagen, you will pass through Snekkersten. The town consists mostly of low-rise buildings, particularly private homes and row houses. Snekkersten harbour brims with atmosphere, with a number of active commercial fishers whose boats bob alongside the many pleasure boats.

During World War II, Snekkersten was one of the primary harbours for the illegal transportation of refugees to Sweden.

There are a number of fun stories about the name ’Snekkersten’, rooted in North Sealand’s popular memory: “The village is named for a large stone on the beach. According to the legend, the stone turns three times when it smells freshly baked bread; also, a witch on the island of Ven threw it at a warlock, it landed where it is now… ”

Snekkersten Harbour is packed with atmosphere, filled with wooden boats, fishing boats and pleasure boats. Near the beach, you’ll find grassy areas with tables and benches so you can enjoy your picnic and have a lovely day by the water.

Some of North Sealand’s most famous attractions are located close to Snekkersten. 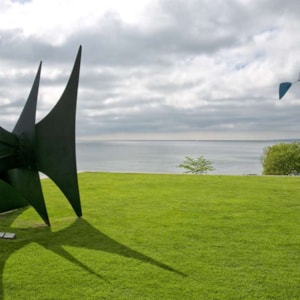 The Louisiana Museum of Modern Art is a leading international art museum and an absolute top attraction in Denmark. Art, nature and architecture combi...

Find a great place to eat near Snekkersten or expand your options to include Helsingør.

Elsinore offers many excellent restaurants and cafes. Sit outside and enjoy the view of the Sound and Kronborg or stay in the centre of the pedestrian zone, where cafés and restaurants lie like pearls on a string.

Where do you want to sleep tonight?

The Crown Route - Around North Sealand

Experience the beautiful North Sealand landscape, the Danish Riviera and Roskilde Fjord. An obvious ride for the adventurous cyclists. The cycle route for you who want to see castles, fishing villages and beaches.

Find opening hours at the tourist information, plan your holiday, see the map of the city, how to get around by public transport, read the large holiday magazine for North Sealand, find a blue flag beach and where to rent a bike? Get answers to this and more here.