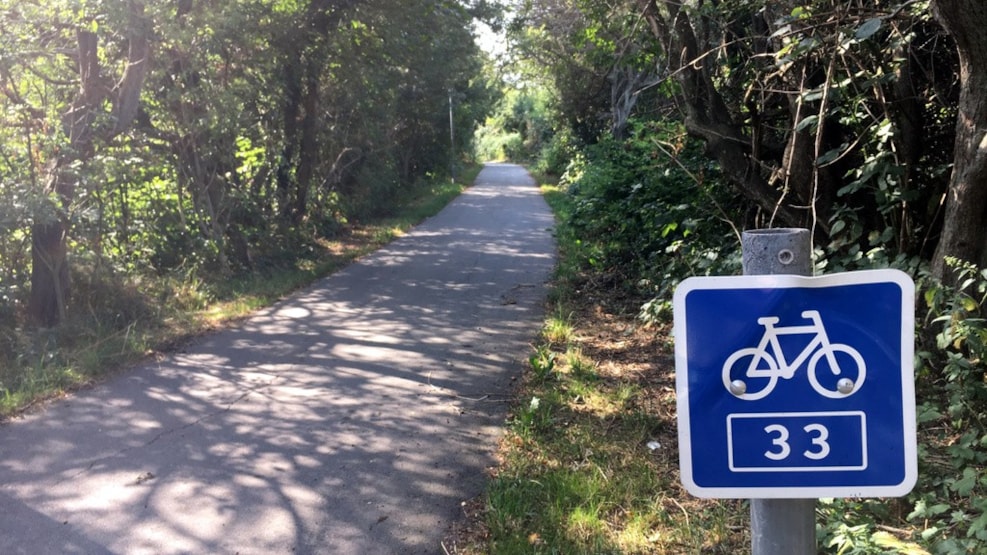 The marked cycle route 33 takes you out on a nice varied 27 km. tour from Frederiksborg Castle in Hillerød to Gilleleje Station - or vice versa. You will cycle through a fantastic castle and the magnificent castle garden, through deep forest, over open plains, past an exciting castle ruin to end by the sea in the cosy harbour and seaside town of Gilleleje. Whichever direction you choose, you can take the bike for free on the Local Railway if the trip gets too long.

By bike through the castle and castle garden

Cycle route 33 begins at Frederiksborg Castle in Hillerød. Follow the blue sign 33 in front of Byporten, the official entrance to the castle at the end of Slotsgade. Here you actually have the opportunity to cycle in through the castle (!) But you may prefer to pull the bike over the topped cobblestones, which form the first part of the trip. Stop by the Neptune Fountain in the outer castle courtyard and take time to admire Christian IV's magnificent Renaissance castle - it´s very impressive!

Continue out through the gate to the left, further through the gilded Ringrider gate and out through Møntporten to Frederiksborg Castle Garden. Enjoy the view of Slotssøen while you cycle the short distance along Rendelæggerbakken, the continuous axis in Frederiksborg Slotshave, towards the Baroque garden. Follow the route 33 signpost to the left towards the charming little Sauna Castle and further past Ødammen with Louise Ø. Then the route leaves Frederiksborg Castle Gardens.

Follow the signs and continue along the cycle path through the small village of Gadevang and into Gribskov, Denmark's oldest and second-largest forest. Over half of the route goes through the forest and you get to cycle under giant treetops with hundreds of years on your back.

In the Middle Ages, the forest belonged to Esrum Monastery and places like Hvidekilde and Grønnekilde were reportedly used by the monks for religious ceremonies. After the Reformation, the forest became the king's property and hunting area, of which the Parforce hunting landscape in Gribskov is a relic.

At the bottom of Søborg Lake

At Saltrup you come out of the forest and through an open cultural landscape with cultivated fields. The route continues over the bottom of the drained Søborg Lake, which was drained in the 1870s and incorporated into agricultural land.

Søborg Lake was before then Sealand's 4th largest lake, in the Stone Age it was a wide fjord with an outlet to the Kattegat at Gilleleje. Over time, a land uplift occurred, which created a lake 5-6 meters above sea level.

Currently, a major nature restoration project of Søborg Lake is underway until 2023. The vision is to recreate the lake in approx. 1 m. Depth, for the benefit of nature, birdlife and biodiversity.

Make a stay at Søborg Castle ruin. A wooden bridge leads over the original moat to the ruin, of which only low walls and foundations remain. An information board tells about the dramatic history of the place.

Søborg Castle was built in the 12th century on a small islet in the lake. In the Middle Ages, the castle was one of the country's largest and best-fortified castles. Here, Margrethe I was born, as the daughter of Valdemar Atterdag, and here the most dangerous enemies of the monarchy were imprisoned. The castle was destroyed during the Count's Feud in 1534-35.

Along Søborg Canal to Gilleleje

Continue the trip along Søborg Canal towards Gilleleje, where route 33 ends at Gilleleje Station. Take time to experience the charming coastal town with old fishing houses, an active fishing port, great eateries and the opportunity for a refreshing dip in the Kattegat. The route abuts the North Coast Path (route 47), so the trip can continue towards Hornbæk or Tisvildeleje and then back to Hillerød along route 32.