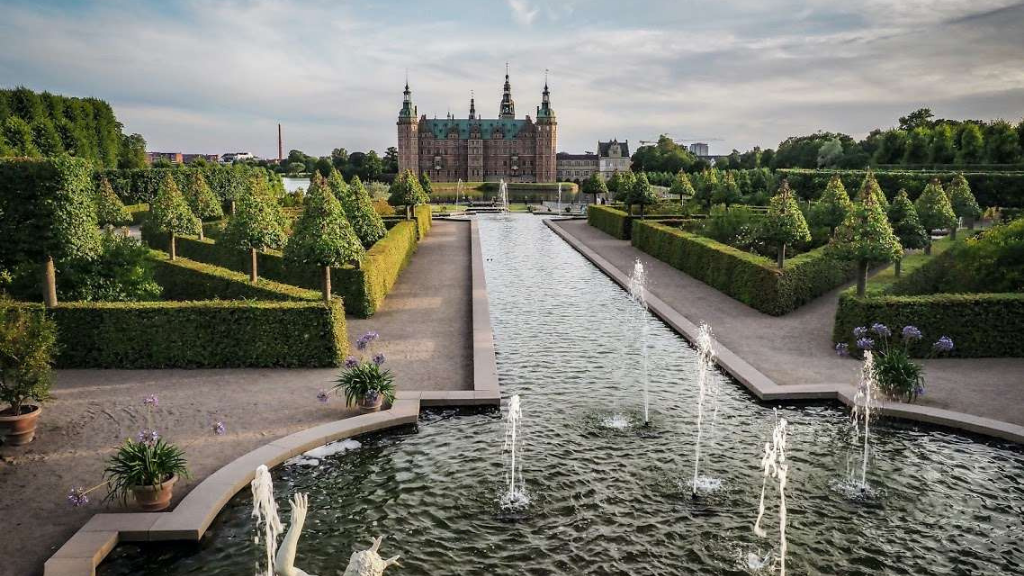 The royal track - 11 km on a bike through Hillerød

Take a bike ride through Hillerød and follow the royal history trail through the city and the Parforcelandskabet. The cycle route is approx. 11 km long.

The royal trail starts at Hillerød Station. Here you walk the bike to a small path called Banestien. The trail goes to Jagtvej and Funkevej to Nyvang and the bicycle barriers where you cross Københavnsvej. The traffic on Københavnsvej is heavy, be careful when crossing the road. Follow the signs to Kongestjernen. In the middle of Kongestjernen, you will find Kompasstenen (the compass stone) where the eight roads cross.

At the end of Batzke's hill, all the attractions of Hillerød unfold; Frederiksborg Castle, the Baroque Garden, the Castle lake, and Den Lille Færge, a small ferry sailing on the Castle lake. Arriving at the Baroque Garden, leave your bikes. Walk to the top of the garden, furthest away from the castle. From this point, you will have the best view of the castle and the garden.

From Baroque Garden through Møntporten (the gate) out to Slangerupgade, you can walk the bikes through Slotsgade or walk the bikes on the path next to the lake. Along Søstien (the path around the lake), there is a beautiful and varied view of the castle. Both Slotsgaden and Søsstien lead to Torvet (the main square). And from Torvet, follow the signs to Hillerød Station.

Hillerød Torv is primarily characterized by the town's old town hall. The old town's hall is a functioning courthouse.

Store Dyrehave forest was used by the king for personal royal hunts. In the late 17th century, Christian V implemented the star-shaped road system for his par force hunts. A beautiful large deer was hunted around the forest by riders and dogs while the king could oversee the hunt from the rock. Only when the deer fell to the ground from exhaustion, the king rode on to kill it.

Frederick II built the part of the castle located on the inner islet. Christian IV built the castle with three wings on the outer islet. The castle, except the Castle Church, burned down in 1859. The rebuilt castle is today a museum.

Teglgårds lake was built in the 1570s as part of a lake and canal system to lead water to Hillerød from Allerød lake. The lake is today purified and functions as a bathing lake.