The city is beautifully situated between Lake Arresø and Roskilde Fjord, so these blue-green qualities are present everywhere. With Stålsat By (Steel City), Frederiksværk seeks to transform what was once a thriving industrial area into a tourist and cultural centre with the industrial landscape as a key element.

In Steel City, citizens, associations, business and cultural players are collaborating with Halsnæs Municipality to create varied and authentic experiences in the steel city. Steel City is a development project where the ambition is to create new, engaging and hands-on urban spaces that reflect the city’s special history and pride, but which at the same time provide the city with new meeting places, opportunities for movement and an improved framework for an active commercial life.

Valsetorvet is the small square situated in the middle of Nørregade, which features a junction that connects the city up toward the forest and down toward Skjoldborg.

Frederiksværk is brimming with industrial history, but Valsetorvet itself did not come into being as the result of a factory closing. Nørregade was designated to be the city’s main street. Here in Nørregade, all the functions of the city were gathered: bakers, butchers, chemists, tanneries, key makers, potters, hatters and many others. It became the main street in the early 1900s. Valsetorvet arose by chance in the wake of a major fire when space was kept clear of new construction – a fortunate turn for the recreational city of today. Just here, there is an important junction towards the forest and towards Skjoldborg, the high school and the fjord.

In November 2015 the steel-structured square, Valsetorvet, was completed. Since then, it has become an appealing place for locals to take a break. Children can let loose here, be active and involve the history of Frederiksværk in their play. Kids can play on the steps leading down to the canal, climb the hemisphere, play music on the soundbars or have fun on the miniature edition of Frederiksværk’s canal structure. For adults, there are south-facing benches, water poles and the opportunity to be very close to the canal. The location makes a shopping trip on Nørregade even more interesting when you can play near the canals or take a break to enjoy the quietly flowing waters.

The lawn is a creative urban space with a Panna field, a small eight-cornered soccer field with a diameter of approx. 6 m2, where football players go one-on-one to score on small goals. There is also a roller skating-friendly track running across the lawn where youngsters can skate to their heart’s content.

Mølledammen (The Mill Dam) is the area around the canal lawn with Torvet and Gjethuset on one side and Nørregade on the other. The area around Mølledammen and Gjethuset was the starting point of Frederikværk’s development as Denmark’s first industrial city. At the mill dam, the energy that drove the works was generated. First was the cannon works, which was located along the canal down from the turbine houses and, of course, the Gjethuset foundry. The area contains a wealth of stories, some of which focus on the French gunsmith, Peyrembert, who unsuccessfully attempted to build a cannon foundry in 1751. Gjethuset, the city’s cannon foundry – and Denmark’s first factory building – stands proudly on the hill as a testament to the grand idea behind the establishment of Frederiks Wærck. Here, cannons and later stoves, pots and pans were cast at De Forenede Jernstøberier (the United Iron Foundries). The entire area was studded with factory buildings which have since been demolished to make room for the Square. The area is now renovated and opened up as a delightful green and creative area in connection with the city, the cultural centre, the canal and the pedestrianised zone.

Allégade is a special urban environment in Frederiksværk. The canal is situated high behind the city’s pedestrianised zone, the avenue forms the city’s promenade and at street level can be found small worker’s houses, several of which originally belonged to the Gunpowder Works.

With the canal, trees and worker’s houses, Allégade is an important landscape and housing structure in Frederiksværk and has been since the 1780s. The Allégade canal was constructed to create hydroelectric power to serve the gunpowder mill and later, the copper rolling mill. Here, there were once small workshops and today you can still see the old forge on the corner of Valsværksstræde. Although many of the houses and workshops no longer exist, the current houses were built to the same scale and therefore still represent the environment from the beginning of the nineteenth century.

Nowadays, Allégade looks almost as it did in the early 1800s. The trees have been replaced due to age, there is still a promenade between the trees and the street is now one-way only. Many people first encounter Frederiksværk from this exact place, as the entire avenue is lined with parking spots. The narrow bridges that span the canal lead directly to the city’s pedestrianised zone. For many, Frederiksværk is the Venice of North Zealand precisely because of Allégade’s picturesque canal and promenade. Allégade is a recreational oasis in the middle of the city. 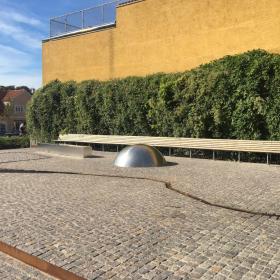 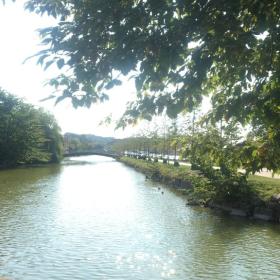 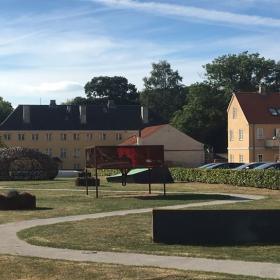 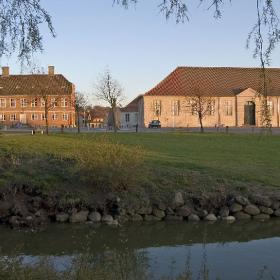