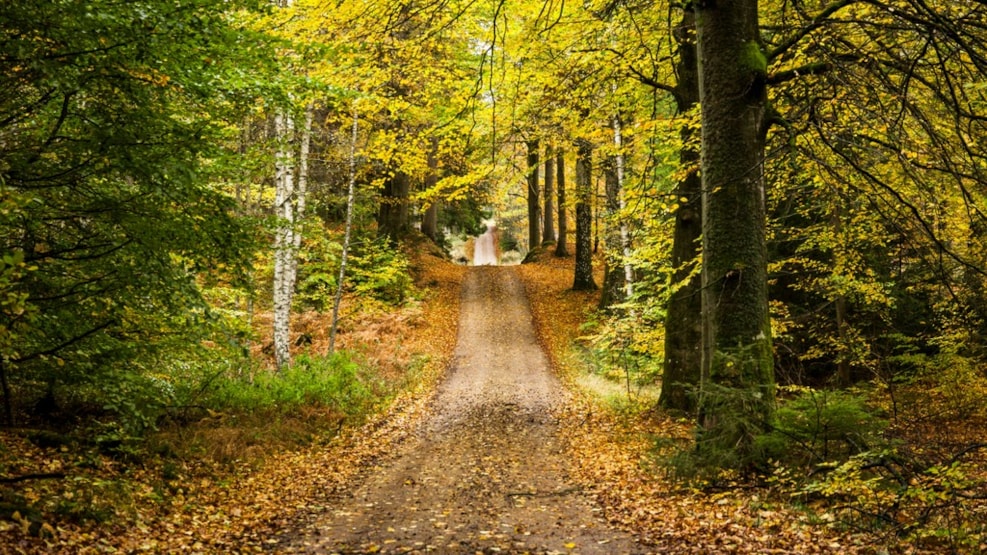 Gribskov | One of Denmark's largest forests

With its 5500 ha, Gribskov is one of Denmark's most extensive forests. The forest is the last remnant of the vast wilderness that in ancient times covered all of North Sealand.

Gribskov (forest) is one of the largest forests in Denmark. The forest is the remaining of the great tangle which covered prehistoric North Sealand. A hundred years ago the lumber from Gribskov was brought to the coast and shipped to Copenhagen where it was used as firewood.

With its 5500 ha, Gribskov is one of Denmark's largest forests. The forest is the last remnant of the vast wilderness, which in ancient times covered the whole of North Sealand.

Gribskov, origins of a name

The name appears for the first time in the King Valdemars Journals in 1231 - Gripscogh. Most likely, the name contains the old term grab (Grib), which, for example, in grab land indicates an area that is not fenced in and therefore is not owned by anyone particular. One can imagine a kind of common forest or grab forest that anyone could use as needed.

The Par For Hunting Landscape

In the Middle Ages, Gribskov was brought into permanent ownership divided between Esrum Abbey and the King. After the Reformation, the whole forest went to the crown. Due to the great hunting interests of the court, the forest was laid out for a large game run for hunting purposes. In the late 1600s, Christian V presented a system of hunting roads that was widely used under the so-called par force hunts. (par force means by force and power). In this hunting form, no firearms were used. A large dog clutch hunted a single piece of wild, half to death. Eventually, the King entered and gave it the coup de grace with a wide-blade knife. In 2015 the Par Force Hunting Landscape was nominated as UNESCO World Heritage

Along lake Esrum there were a total of six grazing pastures. These were used by the royal Frederiksborg Stutteri for summer grazing. The horses were sorted in tribes or stood each in their own pasture. The horses were fenced in by a stone wall. To take care of the horses, they employ the caretaker/guards who lived in small houses along Esrum Lake. Today, the houses are "replaced" by the four forest houses next to Søvejen.

Today you can enjoy the sight of small ponies grazing around Dronningens Bøge/the Queen's Beech on the western shore of the lake.

The interest of the krone in Gribsskov was primarily because of the hunting opportunities. The forest was, therefore, more an amusement park than an economic resource. The trees were virtually allowed to take care of themselves, and useful trees were felled where were found. From ancient times the peasants sent their pigs into the woods, and they repaid the king in tolls, usually every tenth animal or an equivalent value. Horses, cows and goats were sent on grass in the parts of the forest that enclosed the inland areas of the villages.

Since the Middle Ages, the forest began to bear man's mark and around the 19th-century wood was a shortage in Denmark. In the 1780s, the farmers' rights to use the forest were therefore removed. When grazing stopped the forest self-rejuvenated, and the quality of the trees was improved. At the same time, the government also began to plan long-term forest operations, and beech and oak were planted on a large scale. Redwood was also planted, especially on former meadows and marshes. The result of these actions is that the forest can be harvested intensively today.

Recently, however, the forestry administration has begun to reduce the area of pine forest in favour of native trees. More natural forests are also wanted, and therefore areas are laid out where the trees of today are the true descendants of a self-sown forest. Parts of the natural woodland areas are allowed to be untouched forests; other parts are operated with old types of forest administration.