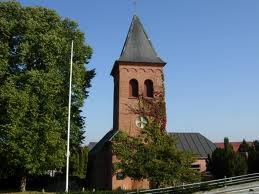 Hillerod Church as it is today is a relatively new church, consecrated in 1987.

Originally stood at roughly the same place a wooden church, which was destroyed in a storm in 1624-25. While waiting for the construction of a new church, the congregation was allowed to worship in the castle, at first in a former barn, later in the castle chapel. This temporary arrangement turned out to last for 363 years before Hillerød Church was finally inaugurated the first Sunday of Advent 1987.