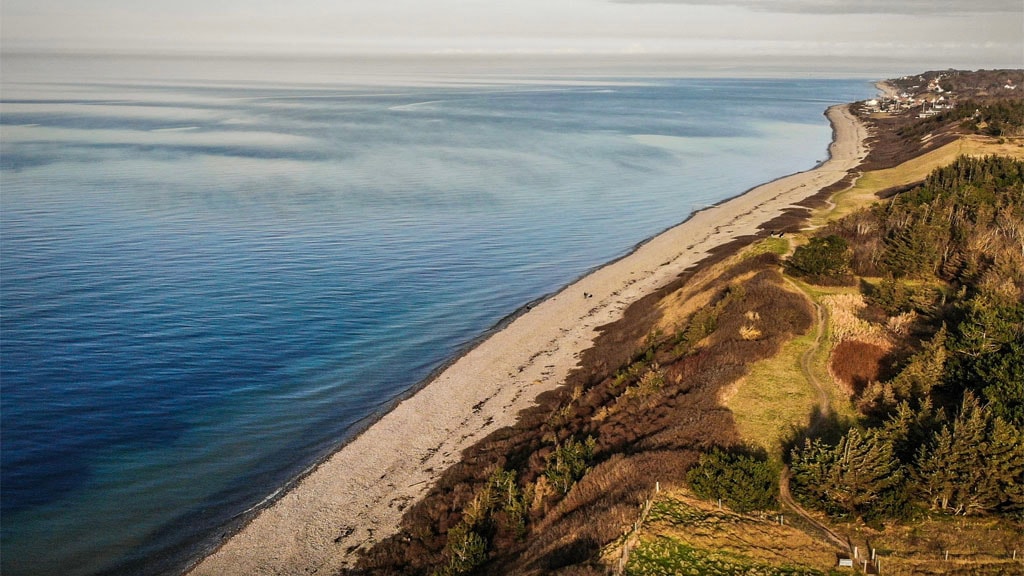 Photo: Ann Jørgensen
Attractions
Natural areas
Heatherhill is an open preserved natural reserve with beautiful grass and heathery hills which resemble the Scottish highland. However, Heatherhill lies in North Sealand near Rågeleje with impressive slopes of 15-20 metres facing the beach and Kattegat. Experience a piece of the original North Sealand nature with a great biodiversity in flora and fauna.
Address

The landscape was formed by the ice

The great hills and valleys of Heatherhill were formed during the last Ice Age. The melting ice carried sand and gravel which settled at the ice edge whereby the large ridges along the coast were formed. Dalstrøget between the beach and the parking lot was created by a giant glacial stream which dug into the ground. Later on, the material in front of the 15-20 metres high coastal slopes was removed by the sea. Over time, the wind has laid a sand layer over the ground, especially during the sand drift in the period from the 16th-18th centuries.

In Heatherhill, there are many different low species of plants which are typically found on moors and open grazing land which along with scattered brooms and junipers dominate the area. This type of plantation covered the majority of North Sealand 100 years ago and thanks to the nature conservation they are still to be found here. The lovely wind flower and bloody  crane’s bill bloom in the spring and summer where heather and crowberry cover the hills in large  mosaic surfaces of rose-pink and purple in late summer.

Do you love butterflies?

The life of insects in Denmark is struggling, however,  Heatherhill’s diversified plantation offers favourable conditions for butterflies. Therefore, you can also experience many different butterfly species. It is actually one of Denmark’s best butterfly locations. The caterpillars of each individual butterfly species depend on a few specific plant species to survive. The rich biodiversity in the low, flowering vegetation makes Heatherhill the ideal habitat for butterflies that are a rarity in the rest of Denmark.

Why is it called Heatherhill?

Heatherhill was the name of the area’s largest property, a summer residence belonging to a wealthy English director, Vincent. He helped securing the area against parcelling out in 1947 for the purpose of preserving the special nature. In 1958, when the area was preserved, the natural choice when selecting a name was of course Heatherhill. The property was demolished long ago.

The fascinating country invites to a hike and the possibilities are plenty. Heatherhill is located at both sides of Rågelejevej with a parking lot with a kiosk and toilets at the south side. From the parking lot, you can go on several hikes in both directions, e.g. the Vincentstien (the Vincent path) through the hills towards the beach and the sea.